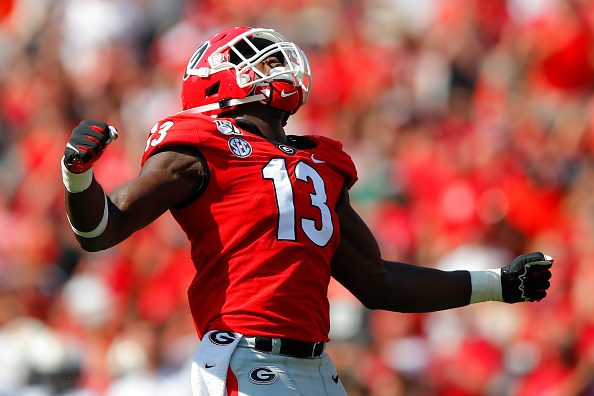 Welcome to our first edition of New York Jets Mock Draft Monday! Over the next eight Mondays, there will be a brand new mock draft, just for the New York Jets. These first couple will be tough considering there is so much that needs to be done by the team in free agency, but we put that to the side for now and try to upgrade this team as if the draft was each Monday.

But without further ado, the New York Jets are now on the clock.

There is not much to think here. Sam Darnold was traded before the draft meaning this has to be a quarterback. Whether that pick is Zach Wilson, Justin Fields or Trey Lance may be a question for some, but I have gotten to the point where it’s concrete in that Wilson would be my selection. We can explain it every time or you could take a look at Luke Grant’s Deep Dive on Wilson and see for yourself.

Having two offers to only move down four and five spots, respectively, while picking up another day two pick is very enticing. There are still plenty of names out there that would fill a hole on this roster; Najee Harris, Rashod Bateman, Azeez Ojulari, Jalen Mayfield and more. So by accepting the trade from Eric Decosta and the Ravens, we will have a shot at at least one of those players.

Two of the top names I was looking at when accepting the trade were taken; Rashod Bateman and Teven Jenkins. However, that also means that Azeez Ojulari is still there for the taking. As mentioned in my first mock draft from Friday, Ojulari may be a little smaller for what Robert Saleh is looking for from an end, but he was able to work with Dee Ford in San Francisco, who many compare the former Bulldog to. Georgia refused to play him as much as he deserved and many times, especially earlier in the 2020 season, Ojulari was asked to drop back into coverage. Despite all of this, he was still able to show his prowess as a pass rusher, getting his name into round one consideration. Saleh will love the energy that Ojulari will bring to the defense right away.

The first pick or two on a new day are very valuable on draft weekend, meaning there is a lot that could come your way. In this scenario only two teams reached out, Cleveland and Denver. Cleveland would require to drop too far. Denver on the other hand gives us an interesting proposal allowing us to bring back a future 2nd round pick, if we give up our 4th this year. The biggest name I see still on the board is Jaelan Phillips, but after taking Ojulari, we shouldn’t double dip. After that there are a couple interesting names but worth trading down to help next year’s draft.

This worked out perfectly in my mind. We dropped, picked up a future two and got the player I wanted still on the board. Players like Pat Friermuth and Landon Dickerson gave me some thought, but Javonte Williams is the pick here. His combination of power, balance, vision and one cut ability will fit superbly into this offense. He may not have that “breakaway speed” but his style of running could take a toll on the opposing defenses. Not only that but he is a reliable option as a receiver and a more than willing blocker, as well. Running back may not be the most valuable position but we know the running game is going to be vital in the offense LaFleur brings over; just look at Green Bay and San Francisco. Plus we cannot rely on the likes of Lamical Perine, Ty Johnson or spend big on the position in free agency. An instant three down back who could break off for big chunks should be a great piece for a young quarterback in Zach Wilson.

As mentioned above, this was the trade received from Washington for Sam Darnold. After going quarterback, running back and defensive end with the first three selections, there are still plenty of different ways to go about the rest of this draft. Offensive line and wide receiver still need help, as do the linebacker and cornerback groups. My heart is telling me to bolster that offense but the defense needs just as much help and Greg Newsome can do that right away in this defense. Newsome is another long DB at 6’1 and uses it very well, particularly in contested situations. In 2020, he only allowed 12 catches while also having NINE breakups for Pat Fitzgerald’s defense. The fact that the ratio is very close to 1:1 is phenomenal. With great instincts and mirroring ability on the outside, to fit in man or zone defenses, you can start to build something with Bryce Hall and Newsome.

Too big of a drop when there are still many needs to fill, thanks but no thanks Ballard. As for Rick Speilman’s offer, it isn’t great losing a pick but we have already gained multiple picks for next year, so a fifth is not terrible to get a fourth this year. There are plenty of intriguing players left so this gives me an opportunity to get one of these players at 119, who would have never fallen to 155.

At this point in the draft, there are two position groups in particular that need to be focused on, if there is value: wide receiver and offensive line. The lack of depth on the roster at those spots is putrid so you can hopefully get a starter but should definitely add to the depth. We lost out on Tylan Wallace due to the trade but there are other players still available; Dyami Brown, Elijah Moore, Amari Rodgers and D’Wayne Eskridge. With those four and a couple others, I would normally feel comfortable making a different selection and hoping one of them falls when we’re back on the clock at 86, but there is one I cannot let slide much longer. Elijah Moore brings something to the Jets offense that is much needed; speed and playmaking ability. No matter where he is on the field, he can bring it to the house with his body movement, quickness and speed as both a ball carrier and a route runner. Moore may not be the biggest guy but they don’t need that as Wilson’s ball placement at BYU was shown to be extraordinary. Get the ball into Moore’s hands and have some fun.

They need offensive line help. Without much thinking, D’Ante Smith is the selection. Smith may not be ready right now, but as a year one spot starter and turning into a full time starter (inside or outside) in year two could be the projection. At the Senior Bowl, Smith really started making a name for himself in the one on ones, all along the offensive line. He can have an issue with his balance but his athleticism and length make him a great developmental lineman in this offense.

We have gone after all of the big holes as of now but the team still has a depth issue all over the roster. Joe Douglas will likely release and replace Alex Lewis and Greg Van Roten this offseason and behind them at guard are Cam Clark and Conor McDermott. Clark was a fourth round selection last year who did not play any snaps in 2020, not to mention he is not the greatest fit in an outside zone scheme. McDermott has struggled quite a bit whenever given an opportunity. So while we have just selected D’Ante Smith, I still want to take chances on the line. Kendrick Green is a former defensive lineman who really started coming into his own in 2020, as both a center and a guard. There are things to be worked out in pass protection but in the run game, his strength and movement skills are good to play right now, especially in this outside zone scheme. We can look at this as a redshirt year for Green and hopefully become a long term piece down the road. Remember, not every pick is going to be a difference maker in their rookie year, bad roster or not. *Watch the left guard below*

As mentioned in my thinking for the pick before, we have already gone through the major positions of need. Time to double down again, this time at edge rusher. Shaka Toney may not be everybody’s cup of tea but for what he brings to the table, he may be more valuable to the Jets than most. He fits the wide-9 scheme very well as he brings great burst and acceleration off the edge with enough flexibility to bend the corner. His weight will be an issue early on so that will likely limit his role to 3rd downs, but in today’s football, that’s still a valuable role. Right now the Jets only have Bryce Huff, Jabari Zuniga, Frankie Luvu and their 1st round pick Azeez Ojulari as the “edge rushers” under contract. While that will undoubtedly change, that’s where we are at right now and Toney could make it into that rotation for passing situations right away.

At this point in the draft, I see this as an opportunity to take chances on high upside players; i.e really good athletes. Josh Imatorbhebhe fits that description to a t. The USC transfer did not have the most luxurious career, only bringing in 57 catches for under 1,000 yards in 19 games across three seasons. You can chalk that up to playing at Illinois but he just did not produce much in college. What he does bring is incredible deep ball skills, a ridiculous vertical, speed and size at 6’2 215. We know Wilson will like to take those shots down the field every now and again and Imatorbhebhe is the exact kind of player you want to throw those up to. Maybe in a couple years, he can become more than just a 50/50 guy.