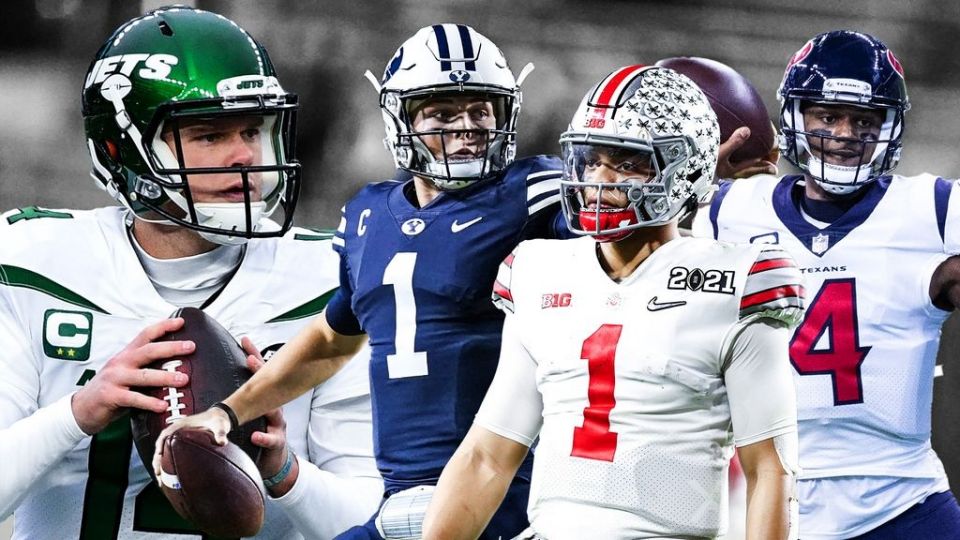 There is much discussion about what Gang Green should do at quarterback at the moment with the general consensus appearing to be that when it comes to the New York Jets draft options, their best move would be to select a new signal-caller at #2 overall and move on from Sam Darnold.

But is there a different route that could yield even better results for the New York Jets?

Legendary NFL writer Peter King thinks so, writing on his FMIA blog that the team should consider hanging on to Sam Darnold and building up the rest of the roster rather than using the #2 overall pick on a quarterback.

King’s rationale is that with numerous teams seemingly desperate to move up for a QB in the draft, the Jets could move down and acquire a multitude of high-level picks with which to build a long-term winner.

Using the Carolina Panthers as a hypothetical, King suggests the New York Jets could trade down to #8 overall and in the process grab an extra second rounder in 2021 as well as extra first and second rounders in 2022.

Were this to happen, it would leave the Jets with 2 picks in each of the first 3 rounds this year, as well as 3 first rounders and 2 second rounders next year.

Opining on what that could mean for the New York Jets, King says it would allow them to add numerous impact players at key positions while essentially placing Sam Darnold on a one-year probationary period.

If Darnold were to succeed in the Shanahan offense under Robert Saleh and Mike LaFluer, Gang Green would have a young franchise QB with potential blue chippers around him from this year’s draft and the pieces to add several more in next year’s draft.

In this best case scenario, the New York Jets could franchise tag Darnold and look to extend him long-term.

And if Darnold fails to improve enough to make signing him beyond 2021 worth the Jets’ while?

The solution for that is simple according to King: Let Darnold walk and use what you need to from the 3 first and 2 second rounders accumulated to get one of the top quarterbacks in the 2022 NFL draft.

After all, as King reminds us, while everybody had their eyes on Clemson’s Trevor Lawrence and OSU’s Justin Fields before the 2020 season, BYU’s Zach Wilson was not even guaranteed to be a starter this past summer and now he is expected to be a top 5 selection in April.

So, while most draft analysts believe North Carolina’s Sam Howell and OU’s Spencer Rattler are the frontrunners to be the top quarterback prospects in 2022, King proclaims that it is impossible to know who else may emerge between now and then in that QB class – which is generally thought to be a weak class on paper – and in the end it could end up being even stronger than the 2021 class, leaving the Jets with a variety of good options to fix the position if a fix is needed.

However, despite recommending the New York Jets consider this path, King closes the part of his column discussing Gang Green by saying that while a huge offer like the one he proposed from Carolina could sway the team’s general manager Joe Douglas, he ultimately expects them to move on from Darnold and draft whichever available QB they like best at #2.