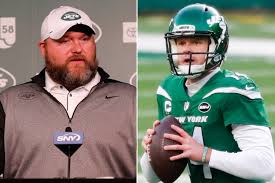 It has long been thought by a majority of NFL insiders that Sam Darnold has likely taken his final snap as a member of the New York Jets.

Per uStadium’s Nick Spano, the Jets will make their final decision on the matter sometime after the pro days for BYU’s Zach Wilson and OSU’s Justin Fields.

In fact, both Mike Florio of PFT and the Very Big Deal Chris Nimbley of Jetsinsider.com said yesterday they believe there is a strong possibility Gang Green will not move Darnold until after they have selected or traded for his replacement.

I understand the New York Jets wanting to be careful and the desire to complete evaluations of the quarterbacks in the upcoming draft to ensure none of them has the potential to be another Isiah Wilson, but the question has to be asked:

Are they waiting too long to make a move?

There is some evidence to suggest that they very well may be.

MMQB’s Albert Breer recently reported that 8 teams have called the New York Jets about a potential Darnold trade and identified San Francisco, Washington, and Chicago in particular as teams to watch.

That sounds good on the surface, until you read the recent news surrounding those teams and look at the quarterback situation of every team in the NFL at the moment in an attempt to find a list of teams that could be partners for the New York Jets in a theoretical Sam Darnold trade.

Let’s start with the teams that either have completely settled quarterback situations or have never been expected to be in the market for Darnold:

Now, let’s break down the teams who have been rumored to be interested in acquiring the former USC star:

Washington – Once thought to be a leading contender for Darnold’s services, they are now believed to be out of the running after signing veteran Ryan Fitzpatrick and bringing back Taylor Heinicke.

Chicago – One of the teams to watch according to Breer, but the Andy Dalton signing likely means they will not be looking to trade assets for a QB.

Pittsburgh – Long rumored to be interested, the Steelers have committed to bringing back Big Ben for 2021, meaning a trade for Darnold is probably not in the cards, since any team dealing for him would be doing so with the intention of him at least competing for the starting job since this is the final year of his initial rookie contract.

New Orleans – Thought to be a possible landing spot after the retirement of Drew Brees, the team’s re-signing of Jameis Winston combined with the already entrenched Taysom Hill more or less closes the door on any deals for a quarterback.

New England – The return of Cam Newton doesn’t necessarily rule out a trade for a QB, but it is highly unlikely that player would be Darnold due to inter-division strife and the Patriots’ reported desire for a different player at that position.

Houston – They obviously have one of the best quarterbacks in the NFL, so this only applies if Deshaun Watson is traded to the Jets and Darnold is either a part of the package or is moved to the Texans after Watson is dealt elsewhere. Neither scenario seems plausible, as the Texans are said to want a draft pick high enough to select one of the 2021 NFL draft’s top QB prospects IF they were to walk away from their star signal-caller.

Carolina – Identified by ESPN’s Adam Schefter as one of the teams that has called the New York Jets about Darnold, this could be a legitimate possibility because offensive coordinator Joe Brady may see untapped potential in the soon to be 24-year old. However, Carolina does pick 8th in the draft, and they do have a serviceable starter in Teddy Bridgewater, so a deal will only happen if the Panthers are convinced Darnold is an upgrade over Bridgewater or are reluctant to trade up a few spots to get one of the draft’s top QBs.

Denver – NFL Network’s Daniel Jeremiah is one of many people who has speculated that the Broncos could be in the running for Darnold. It would make sense on the surface since Denver GM John Elway reportedly really liked the current Jets QB entering the 2018 draft to the point where he unsuccessfully tried to trade up for him. This seems like a realistic possibility, but only if Elway believes he cannot get a better QB at #9 overall, is unwilling to trade up to secure a signal-caller he likes, and is convinced Darnold is better than Denver’s current talented but erratic incumbent, Drew Lock.

San Francisco – This could be the most likely suitor of the group, as the 49ers are said to have been the most aggressive team thus far in trying to trade for Darnold and it is thought that the native Californian would be a strong fit in San Francisco head coach Kyle Shanahan’s offense. That said, there have been reports to the contrary and San Francisco would have to believe Darnold has the ability to be an upgrade over current starter Jimmy Garoppolo, who is unremarkable, but still quite capable when healthy.

So, if we are being realistic, after the events of the past few days, with Chicago, New Orleans, Pittsburgh, and Washington likely out, it appears there is a good chance the only 3 teams who may be willing to trade worthwhile assets for Darnold are Carolina, Denver, and San Francisco.

And any deal involving one of those teams would require a fair amount of moving parts.

So, even if all 3 teams ARE interested, there is no guarantee they are interested enough to navigate the complications a Darnold trade could bring not to mention be willing to move valuable draft capital to make it happen.

8 teams have called about Darnold since the season ended.

Now, there are 3 teams left.

In what amounts to the quarterback equivalent of musical chairs, odds are the number of seats left for the New York Jets and Sam Darnold when the music stops will continue to decrease the longer this situation continues.

If the New York Jets are indeed planning to move on from Sam Darnold, then they are taking a dangerous gamble by continuing to hold onto him rather than deal him before other teams exit the conversation the way Pittsburgh, New Orleans, Washington, and Chicago already have.

In effect, Joe Douglas is playing a game of high stakes roulette and hoping he doesn’t come up completely empty.

For the sake of both the New York Jets and Sam Darnold’s career, let’s hope he knows what he’s doing.