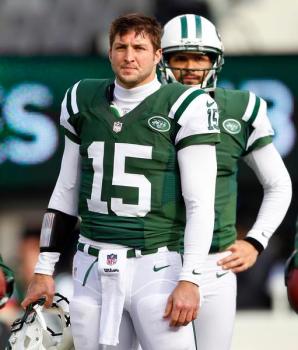 Too much attention paid to one player — especially a non-star — throws a locker room out of balance. It is a recipe for resentment, division, and distraction.

I can’t stress enough how notoriously allergic front offices are to the prospect of distraction. This doesn’t just go for divas like Antonio Brown or Jamal Adams.

Enter 34-year-old novice Tight End Tim Tebow, who if signed by Jacksonville, will instantly eclipse Trevor Lawrence in bad ways and good (which might be the play here). I wouldn’t put it past Urban Meyer to employ his former star as a diversionary tactic that permits his new one to thrive. Could this all be Meyer media misdirection, reminiscent of Rex’s surprisingly sophisticated PR playbook?

Whatever you think of Tebow personally, it is clear that he enjoys a longstanding, loyal cult following who tend to inflate his super powers. The stat sheet simply doesn’t match up to the legend. And he has many eye-rolling detractors— some merit-based, others personal.

When Tebow was in Denver, the vaunted defense that carried that team to the playoffs resented that all the ESPN and NFL Network cameras came to town for Tim. So much so that they had to take his interviews outside, out of the view of the already-stewing defense. Marcia! Marcia! Marcia!

Front offices won’t sign-up for that which they can’t control. The same fans and pundits who applaud the signing of a Tebow will pressure a team to start him, making it hard to bench him if the situation warrants it. Said fans will also protest if Tebow is cut. Personal emotion and media mischief-making are too frequently immune from consistency these days.

In Tampa, I used to work with an NFL head coach who often stressed amidst crisis, “I’ll tolerate you until I can replace you.” Such decisions aren’t a question of fairness as much as they’re telling of a football team’s aversion to circus — which they intrinsically believe is anathema to on-field success.

In other words, the juice just ain’t worth the squeeze.

In this article:New York Jets