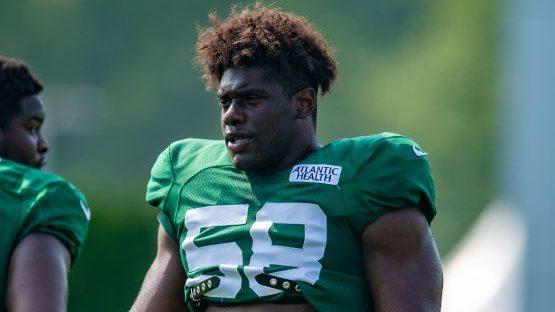 I sat down for my lunch hour hoping to relax from a pretty hectic morning with updates from Parkers/Jets joint practices only to be hit with a mixture of stunning confusion, ache and my breath being taking away, almost like a punch to the gut.

Carl Lawson was reported to have some kind of leg injury and was surrounded by trainers and teammates taking a knee praying for good news.

Turns out, after an MRI that he has a torn achilles and will be out for the seasomI instantly felt the whole of Jets nation kneeling in prayer.

Lawson personified a rebirth at a position that the organization hadn’t prioritized for more than a decade but more than that the daily updates of his dominance quieted that uneasy feeling of a mediocre team that is too young to win anything this year.

Though Carl hadn’t realized completely his dream of being elite he promised he would be this year on his twitter account and like an Anime character, the ones he loved, it seemed like he was poised for his shining moment.

There was a flurry of Jets fans sending well wishes out but mostly the sound of our hope getting crushed slowly rang in the air. This would have been the year and it still can be.

I know what this feels like because I can feel it to, but if any of you watch anime like Carl does, you know the story never ends here. This is the part where the hero rises from the most arduous of circumstances to win the fight.

Carl Lawson will be fine and will make a full recovery but more importantly this you team of coaches and players will rally around their star pass rusher and do it for him.

Remember was a bigger loss earlier this year when Coach Greg Knapp passed away and this team kept fighting,

The 2021 New york Jets won’t be defined by these circumstances but will grow stronger through them together. I believe in them and coach Robert Saleh and so should you.