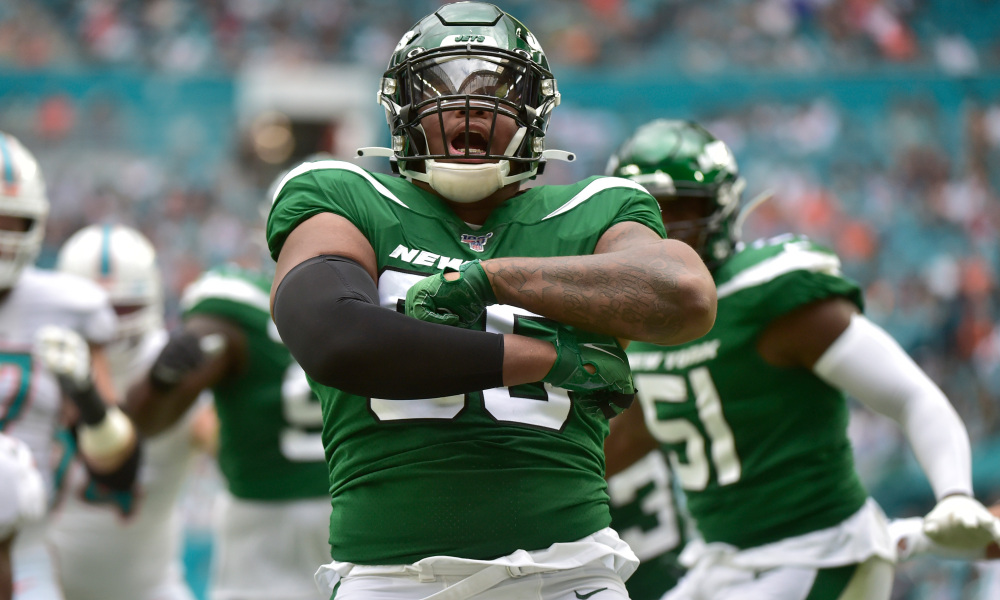 MIAMI, FL - NOVEMBER 03: Quinnen Williams #95 of the New York Jets celebrates after sacking Ryan Fitzpatrick #14 of the Miami Dolphins during the first quarter of the game at Hard Rock Stadium on November 3, 2019 in Miami, Florida. (Photo by Eric Espada/Getty Images)

There will be an inevitable name search for this Jets D-line, the inevitability lies in the enormous potential of each and every player who makes up this crew.

The cherry on top is Robert Saleh/Jeff Ulbrich’s defensive scheme which preaches an aggressive, attack like plan for the D-line, making them the focal point of this defense.

Fortunately, the name most synonymous with D-line greatness in Jets lore is the Sack-Exchange of early 80″s which comprised of Gastineau and Klecko as edge guys and Lyons and Salaam as interior guys.

Those are gigantic shoes to fill but a marriage of talent and scheme might just be what gives the new kids a chance at greatness.

The addition of Carl Lawson is probably the biggest jolt towards dominance this line has had. Its been mentioned numerous times how devoid of edge rushers the Jets have been since maybe, Muhammad Wilkerson or John Abraham.

Lawson is the prototypical edge guy, with the combination of strength, speed and skill. Long arms and a mean streak while on the field.

He has shown early in camp that he will be a force, getting the best of the big ticket(Mehki Becton) several times. accounting for what he is puts offenses in a pickle because what this line has in spades is interior D-line talent.

Quinnen Williams took a leap up the lists of the best interior D-linemen last year in only his second year in the league with limited experience and a scheme that asked of him a more read and react approach.

He had several dominant performances earlier in the year But later in the year when he was unleashed into a more attacking style he showed flashes of an elite D-lineman which when paired with Lawson will prove formidable.

Get some popcorn and get yourself some 2018 Sheldon Rankins film and thank me later.

Pure athleticism and extreme strength and explosive plays are littered al over that film and any percentage of that guy shows up he will be a headache for any opponent. Add to that Vinny Curry who’s not the guy he used to be but can spell trouble in small doses, John Franklin-Myers who teams should underestimate at their own risk, Foley Fatukasi who is billed as a premier run stuffer but has the athleticism of a much smaller man to go with ridiculous power.

Then there is Nathan Shepherd, Kyle Phillips newly drafted freakishly athletic Jonathan Marshall, unheralded Bryce Huff who has flashed and Jabari Zuniga and others who are talented.

These talented players will all have an opportunity to make a mark on the history of the New York Jets following in the footprints of the Sack exchange and make their own name.

The NFL will be so tied up looking at the Jets rookie QB, WR combination that they won’t see the squad coming, by then it will be to late.