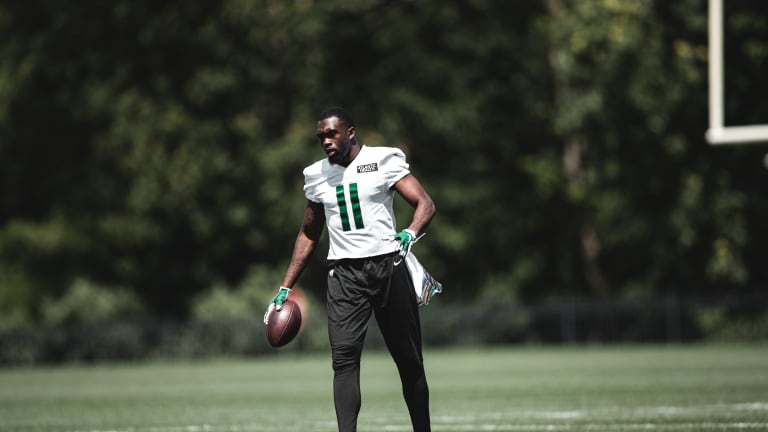 After the Jets loss to the Panthers on Sunday, the question remains for Jets fans: What’s going on with Denzel Mims? After running with the backups for the overwhelming majority of training camp and preseason, and logging just 3 total snaps this weekend, it is clear that there is a disconnect somewhere between the coaching staff and the 2020 2nd rounder.

When Mims saw the field and was given targets in 2020, he showed plenty of flashes including impressive hands, yards after the catch ability, and physicality. Of the flaws one could put on Mims one might include lack of separation, where he often was forced into contested catch situations where maybe such a situation could have been avoided. That being said, any person with a working set of eyes could see that Mims is an elite athlete and possessed the necessary skills to be a solid number 2 WR in the NFL.

When the final injury report this past Sunday came out, Keelan Cole and Jamison Crowder were listed as officially out and fans finally got their hopes up that they might be able to see the receiving trio of the future, with Davis and Mims on the outside and Moore in the slot. This was not the case, with Mims receiving the least amount of reps of all the wide receivers behind Jeff Smith and Braxton Berrios. During the game, I was in attendance, wondering what the deal was with Mims lack of game action, as were the vast majority of Jets fans around me vocalizing their displeasure. I reacted almost angrily out of frustration when Mims caught a long ball down the left hash to get the Jets into scoring range, wondering what the coaching staff was missing.

Was there something wrong with Mims? Was he dealing with an ailment? Did he say something or do something that rubbed the coaching staff the wrong way? Could they seriously believe that players like Jeff Smith, Braxton Berrios, or even a guy like Ryan Griffin deserved more playing time and targets than a player the calibre of Denzel Mims? Lastly, I wondered whether Mims did not understand or fully grasp the playbook…

Robert Saleh brought some light to the situation in his press conference today:

“Mims… when you’re not one of the main three you’ve gotta know all three spots, and you’ve gotta know it at a high level so you can step in and take advantage of all those opportunities… so if the Z or the F or the X needs a break, you’re the first one that goes in because you know all three spots you can execute at a high level and you could roll…”

From this answer I decided that my final guess was likely the closest to meeting reality. The coaching staff seems to feel that Denzel does not have a full grasp of all three receiver spots and therefore they did not trust him to be in a game over a player like Smith or Berrios.

I can see where they are coming from, but my retort would be this. Denzel Mims is the more dynamic, explosive, athletic receiver, who time and time again when given chances proves he deserves to be on an NFL field receiving reps over lesser players like Braxton Berrios and Jeff Smith. As fans, we have seen plenty of Berrios and well enough of Jeff Smith to know this is the case. The best offensive play-callers simplify the game for certain players when necessary to maximize the talent of the best players on their roster.

If it was an isolated case, it would be less worrisome, however this was a trend from the Gase era which is once again rearing its ugly head, and that trend is putting faith in older, mediocre talent instead of giving chances to younger, more explosive players. I have seen enough of the Tevin Coleman’s and Ryan Griffin’s of the world. A player like Josh Adams has shown me more in the last two seasons than Coleman has in the last two years. There is absolutely no reason why Ryan Griffin should be getting SIX targets in a football game in the year 2021, and Mims getting 1. Whether it is really a Mims problem or a LaFleur problem will likely be revealed sooner rather than later.

Lastly, I will say this. Joe Douglas’ drafting as of today has left much to be desired, particularly his 2020 draft class which thus far has largely disappointed. Even his best picks of that draft on paper, Mekhi Becton and Bryce Hall, have either struggled to stay healthy or have been inconsistent starters. When you take away those two, you are left with Cam Clark who has not logged a single NFL snap, Ashtyn Davis who has barely played due to injuries and at best has shown a few flashes, James Morgan who is a Carolina Panther, Jabari Zuniga who is on the practice squad because no team wanted to claim him, LaMical Perine who has been mediocre at best, and Denzel Mims who is struggling to get any snaps at all after being considered one of his better 2020 draft picks just a few months ago. It is one thing to accumulate picks, and another to use them effectively. Douglas needs to do better and hopefully his 2021 picks will make up for his failings in 2020.