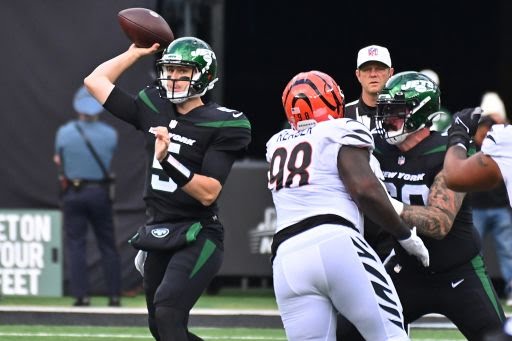 In the most improbable performance I’ve ever seen as a Jets fan, Mike White threw for 405 yards 3 touchdowns and 2 interceptions and more importantly the New York Jets won against the hottest team. I stood up staring at my television for most of the game in disbelief. His precision passing and quick decision making was a surprise even though I’d watched him in camp. His wasn’t the only performance that propelled the Jets to victory though.

Michael Carter the running back was relentless and difficult to bring down encapsulating a Jets performance that we needed and didn’t see coming after a 54 point drubbing by the Patriots last week. Carter had 77 hard earned rushing yard and 95 yards receiving, punishing a Bengals defense who’s game plan seemed to be let the Jets QB complete short throws but they just couldn’t get the Jets backs down. Scripted plays hadn’t been the Jets offensive forte but this game proved to be different with White going 11 for 11 at one point. He sunk a little with some unlucky turnovers but the the Jets needed him most he came through.

On defense Quinnen Williams and Sheldon Rankins brought the defensive line to life after their lack luster performance last week each with a sack and several pressures.The linebacking core with the return of Mosley and Davis performed admirably in coverage and in the run. Marcus Maye also reverted to the best of himself with 5 tackles one for a loss or yards.

Lastly the coaching staff shone. Mike Lefluer back in the booth looked the best he has with timely screens and runs taking advantage of an aggressive bengals defense. Robert Saleh marched his squad into MetLife with determination and that never say die attitude that he is known for but we had never seen in New York as the head coach. This might not be everything but the fact that this team showed up the way they did showed that the plans in pace at one Jets drive are still in motion.