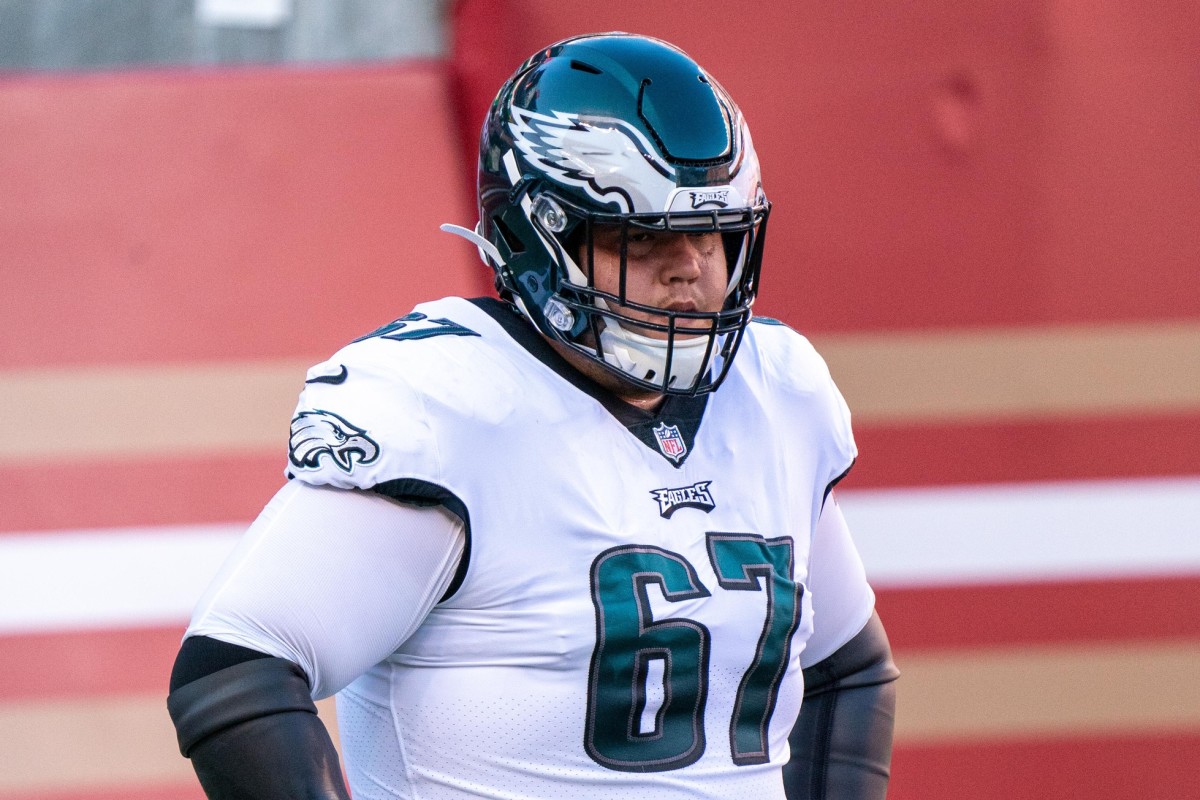 Yesterday Joe Douglas continued to build out the Jets 2022 roster signing recently released interior offensive lineman 23-year-old Nate Herbig. Herbig was granted his release by the Philadelphia Eagles earlier in the week. The Eagles drafted center Cam Jurgens in the second draft of the 2022 draft last Friday, creating a log jam and no clear path to playing time for Herbig.

The Eagles had placed a right of first refusal tender on Herbig during free agency, which he signed just prior to the draft.

A Hawaiian native, Herbig went undrafted in 2019 after leaving Stanford following his junior year. The 6-foot-4, 334-pound guard slipped in the draft in part due to a poor 40-time (5.41) worst of all participants in the 2019 combine. The Eagles signed Herbig as an undrafted free agent, Joe Douglas was the vice president of player personnel for the Eagles at the time.

Here is Lance Zierlein’s draft report of Herbig from 2019:

Thickly-built guard prospect with an NFL frame and good run blocking power, but an inability to impose his will as a block-finisher. He has the desire to finish, but that desire is often short-circuited by a lack of balance or an inability to secure blocks with his hands. While teams will be drawn to his mass, he’ll need to control his weight in order to play with better functional quickness. Herbig is a future starting guard, but his physical deficiencies could make him a more up-and-down performer than celebrated starter.

While the Jets are solid at guard with Alijah Vera-Tucker and Laken Tomlinson entrenched as starters, Herbig provides much-needed depth. The former Stanford Cardinal has played all three IOL positions during his three seasons in the NFL, starting in 17 games due to injuries along the Eagles’ offensive line. In 848 pass-blocking snaps, Herbig has allowed just three sacks and four quarterback hits, according to Pro Football Focus (PFF). This probably puts an end to the Jets’ career of Greg Van Roten.

Last season Douglas made a similar move when offensive tackle Morgan Moses was released by the Washington Commanders in June. Moses started the season as the Jets’ swing tackle but was quickly forced into action when Mekhi Becton was lost for the season in week one. Moses played in all 17 games, starting 16 in 2021, allowing just four sacks in 679 pass-block snaps.

Douglas continues to do an excellent job of creating depth on this Jets roster. Herbig provides New York with a young, versatile lineman that has three years of NFL experience under his belt at just 23.

When looking around at the current state of the Jets roster, the amount of depth Douglas has built at some positions is remarkable. It is a good feeling to know that when someone gets hurt the Jets have the depth of talent now to really subscribe to the next-man-up mentality and actually believe it. The days of the Gang Green signing guys off the street to start on Sunday are hopefully behind them.

In this article:Joe Douglas, nate herbig