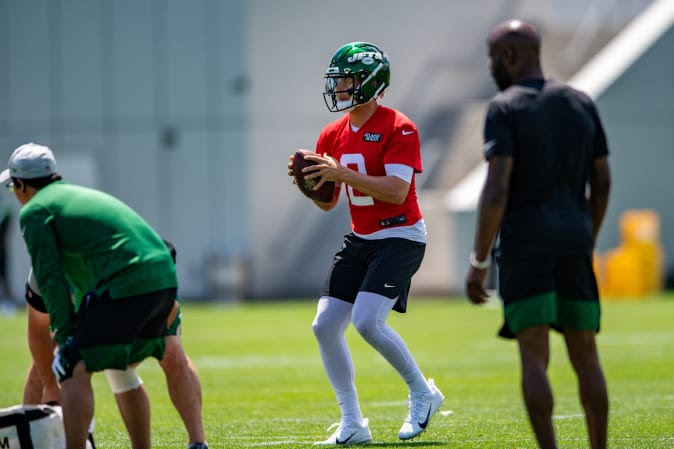 We all know that this era’s NFL football is primarily passing game centric and thats reenforced by how the QB is at the center of every move teams make. A new beefy looking Zach Wilson showed up to this year’s offseason workouts ready to take hold of this team’s preeminent position. The added weight shows his intent to transform his body to a pro QB who can absorb the physicality of an NFL season. His dedication to morphing into a pro QB shows his intent to make the team and organization his priorities as much as they make his theirs.

Team’s spend time talking up their young QBs forcing the narrative into the airwaves but ultimately it’s moves like adding playmakers through the draft and free agency bolstering the team’s weaknesses creating a fertile surroundings for the young QB to thrive in. What shows their intent more evident is allowing the QB into the future planning like asking their opinions of players who might be added. Zach mentioned the team asked him to watch tape of most of the 2022 drafts’ top-end talented wideouts and rank them. This fosters an environment of inclusion between the team and their young signal-caller. They happened to also pick his top-ranked Wide receiver building on the trust that they have built together.

Like any other relationship if everyone gives one hundred percent of themselves the investment has a higher probability of working. Zach in his outward change of appearance and the teams’ inclusive approach to future, planning shows that they both are willing to go all-in. This organization’s history is littered with talented signal-callers that they failed by investing very little future planning or scarcely forming the inclusive surroundings that lets a young man know you’re all in. Their intentions are pure by many standards but the NEW YORK JETS can erase all their pass misdeeds by going all the way with this QB. He has shown a propensity to give it his all and we have seen proof that this front office won’t leave anything to chance. May this union bear fruit the likes that most of us Jets fans has never seen in our adult lives.