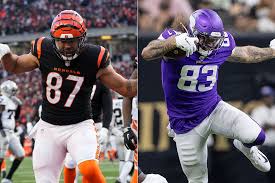 All is quiet in the NFL as players and fans enjoy summer beach trips and backyard barbeques. But training camp is just around the corner, with rookies reporting on July 19th and veterans a week later on July 26th. In a very busy offseason, the Jets signed nine outside free agents and selected seven players in the draft. New York could have potentially more than 30% of its roster consisting of new faces.

This series of articles will look at each of the Jets’ position groups, how they compare to last season and what to expect in 2022.

The first group is tight ends. Why tight ends to start? Because this room has been completely rebuilt and has a real chance to be a significant strength in 2022 after being a weakness in 2021.

Heading into last season the importance of the tight end was a big topic under first-time offensive coordinator Mike LaFleur. Coming from the Shanahan tree, LaFleur was expected to feature the tight end as both a pass catcher and run blocker. The trouble was the Jets did not have a player on their roster that was up to the task.

They added Tyler Kroft in the offseason but he battled injuries and when he did play, he was not very effective. Kroft finished the season with just 16 catches of 173 yards in nine games. A holdover from the 2020 season Ryan Griffin did not fare much better. Griffin hauled in 27 catches for 261 yards. Neither Griffin nor Kroft offered much in terms of yards after the catch (YAC). Griffin finished 35th among tight ends in YAC and Kroft 58th.

In order to help young quarterback Zach Wilson and to allow LaFleur to run his scheme the way he wants, general manager Joe Douglas signed two tight ends in free agency. First, the Jets signed 6-foot-6, 260-pound C.J. Uzomah. At 29 and coming off a SuperBowl run with the Cincinnati Bengals, Uzomah was the perfect veteran to help bring along Wilson. The former Auburn Tiger played a key role in the development of Bengals quarterback Joe Burrow, who led them to the Super Bowl in his second season.

Next in a surprising move, Douglas inked former Minnesota Vikings tight end, Tyler Conklin. The 6-foot-3, 248-pound former Central Michigan product had a breakout season in 2021. He set career highs in receptions, yards, and touchdowns. At 26 years old Conklin is entering his prime.

Both Conklin and Uzomah give the Jets significant upgrades at the tight end position as both blockers and pass catchers. Uzomah was sixth among tight ends in YAC while Conlin was ninth. The ability of both players to add yards after the catch will help keep the Jets’ offense moving in 2022.

Uzomah was PFF’s 18th-ranked pass-blocking tight end. He allowed just one pressure all season. Conklin was charged with allowing 10 pressures last season but the Vikings thought enough of his blocking ability, often leaving him one-on-one with defensive ends.

In the third round of the NFL draft, Gang Green added Ohio State prospect and lifelong Jets fan, Jeremy Ruckert, to the tight end room. Douglas was not content with the addition of two solid veterans, he continued to rebuild a position group that has been a black hole for the Jets for years.

The Long Island product is 6-foot-5 and 250-pounds is often comped the Dallas Cowboys tight end, Daulton Schultz. He is what Lance Zierlein of NFL.com had to say about the former Buckeye:

Muscular move tight end on the collegiate level who should be able to find a home as an in-line worker. Ruckert should test well creating a favorable height-weight-speed profile that could push him up draft boards. He blocks with good aggression, but can be a little inconsistent at the point of attack for now. He’s not as explosive in his route-running as his testing might indicate but will catch what is thrown his way even though he might never be much of a volume target. He has TE2 potential and could become an average NFL starter.

Ruckert will have the luxury of learning the NFL game behind two veterans. The 21-year-old will not be asked to step right in a be a focal point of the offense. Ruckert is very good at attacking the seams and does an excellent job of catching the ball away from his body. And also shows an excellent ability to adjust to poorly thrown balls.

The Jets really have some solid depth at tight end as they enter the 2022 season. Gone are the days of signing guys off the scrap heap or hoping the newest undrafted free agent makes an impact. New York also has Trevon Wesco on the roster who plays more of a fullback role. They also have converted wide receiver Lawrence Cager and 2021 undrafted free agent, Kenny Yeboah, in the mix. While both have shown some flashes, it is hard to imagine either making the 2022 roster.

Tight end should be a position of strength for Gang Green in 2022. Both Uzomah and Conklin are major upgrades from Kroft and Griffin. Look for the position to be featured more this season, allowing Wilson to complete some easy passes to big targets that have the ability to extend the play after the catch.