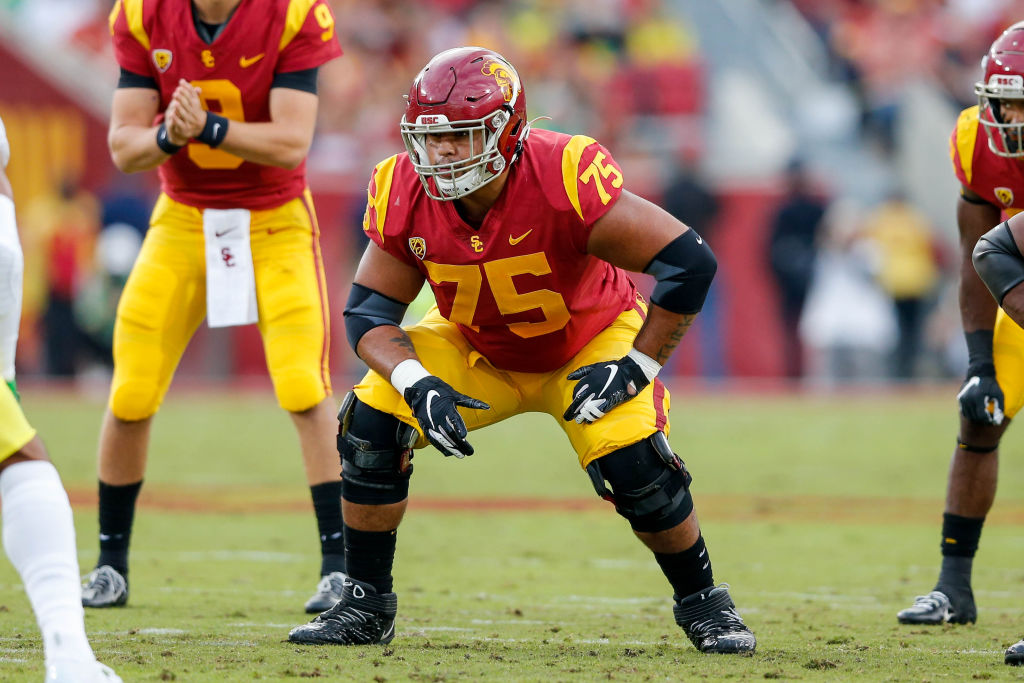 Last week the guys over a uStadium released a list of draft prospects that the Jets have spoken with. As stated in the report this does not mean this is who the Jets will draft but it does give an insight as to the positions and types of players they may target. In the first of a two-part series, we will take a look at the wide receivers, tight ends, and offensive linemen mentioned in the report.

Darby is 6-foot-1 and weighs 200 pounds. The former Sun Devil had six catches for 46 yards in ASU’s three games last season. Darby had 67 career catches on 132 targets a dismal 50.8% of targets caught. His 0.84 yards per route run in 2020 ranked him 86th out of 92 qualifying receivers. Pro Football Focus (PFF) projects him as a seventh-round pick.

Schwartz is the fastest receiver in this class as evidenced by his 4.27 forty time. At 6-foot and 179 pounds, Schwartz is pretty thin. He is a track star playing football but his speed is elite and that will be enough to get him drafted. Schwartz reminds me of former Jets wide receiver Robby Anderson. PFF sees him as a sixth-round pick.

Bateman measured in at 6-foot-3/8 and 190 pounds at his pro day after being listed as six-foot-two and 210 pounds while at Minnesota. The former Gophers receiver posted an impressive 4.39 forty time. Bateman is very good after the catch, breaking 36 tackles on 147 career receptions. Look for the junior to come off the board in the first round and could be in play for the Jets with the 23rd pick.

The 6-foot 190 pound senior is a YAC monster. His 477 yards after the catch were seventh-best in this draft class. Toney broke 32 tackles on just 80 catches the past two seasons according to PFF. The former Gator has elite hands as well, having been charged with only three career drops. Toney is likely to come off the board late in round one or early round two.

Smith, 6-foot-1 and 175 pounds was PFF’s highest-graded pass catcher in 2020, receiving a 95.6 grade. Smith was the first wide receiver to win the Heisman Trophy since Desmond Howard did it in 1991. He is unlikely to be in play for the Jets as he is projected to go in the top ten.

At 5-foot-7 and 181 pounds, he is among the shorter prospects in this draft class. Moore hauled in 178 career passes for 1,913 yards. He recorded an excellent 4.32 forty at this pro day and an elite 6.88 three-cone drill. Moore’s size will have him taken off some draft boards but he can be an electric weapon out of the slot at the next level. The Jets need dynamic weapons and if Moore is still on the board in round two he’d be hard to pass up.

Smith-Marsette who measured in at 6-foot-1 and 179 pounds has a similar profile to Schwartz. He turned in a disappointing 4.5 forty at his pro day but he was able to get open consistently down the field at Iowa. The rail-thin New Jersey product was a one-trick pony in college. PFF projects him as a fifth-rounder. This is the second receiver that has a similar comparison to Anderson, so maybe the Jets are looking for a receiver that can take the top off a defense.

Rodgers is a 5-foot-10, 210-pound slot receiver. The senior caught 77 passes on 99 targets, a catch percentage of 77.8. Rodgers is not a burner, posting a 4.52 forty time but he did record 17 missed tackles forced last year, good for seventh-best. PFF projects him as a fifth-round pick, Jets may be looking for Jamison Crowder’s 2022 replacement.

Tremble is undersized for a tight end at 6-foot-3 and 241 pounds. He was not used much in the passing game at Notre Dame recording just 35 career catches. Tremble was however PFF’s second-highest graded run-blocking tight end. Look for Tremble to transition to full back in the NFL and could come off the board in the fourth round.

The 6-foot-2, 245-pound junior ran a 4.68 forty at Miami’s pro day. Jordan has great YAC ability, breaking 21 tackles on 105 career catches. He was not asked to do a ton of inline blocking in Miami so it not clear how he will be as a blocker at the next level. PFF projects him as a fourth-round pick.

Jenkins stands 6-foot-6 and weighs 320 pounds. The red-shirt senior allowed just two sacks in the past three seasons and they both came in 2018. Jenkins is an older prospect at 23. He has the ability to kick inside and play guard and got a 91.2 zone-blocking grade from PFF. Jenkins could very well be in play for the Jets with the 23rd pick if he is still on the board.

Vera-Tucker played left tackle in 2020 after having been primarily a guard. The former Trojan excelled at tackle before his struggles in the Pac-12 Championship game. Vera-Tucker will likely move back to guard in the NFL but it is nice to have the versatility to play both at the next level. Another guy that would be in play with the 23rd pick, if still on the board.

Jones measured in at 6-foot-5 and 307 pounds at his pro day. He played right tackle for all but two snaps in 2020 but projects to guard in the NFL. In 320 pass block snaps he allowed just five hurries last season. Jones is a late round pick.

Moore did not play in 2020 due to the FCS postponing the season due to Covid-19. The 6-foot-2, 330-pound guard was impressive at the Senior Bowl, earning offensive lineman of the week. Grambling has not had an offensive lineman drafted to the NFL in nearly 30 years.

Last season the 6-foot-2, 302-pound center allowed just 7 hurries in 401 pass-blocking snaps. PFF gave him an 88.1 zone-blocking grade and has three years of starting experience. There has been some talk of Humphrey going in the first round, I think the Jets would be delighted if he fell to them in the second round.