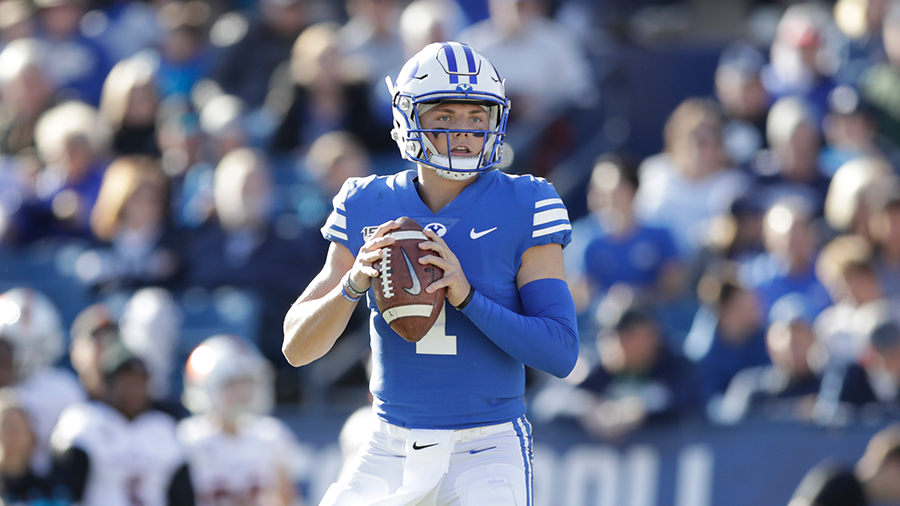 Christmas morning ain’t got ***t on this. It’s Draft Day morning and I could not ask for anything better. As Jets fans, we obviously long forward to this day longer than we should but it is also the day that mentality can all change.

What every fan, no matter the fan base, needs to do is just remember that there is no need to get too upset over a draft pick. Sure, you can have disagreements, but at the end of the day, we do not know how a player is going to be at the next level, otherwise the draft would be easy and quite frankly, not as fun. There is so much optimism in the air for Jets fans that we cannot lose sight of that after three days.

If you missed Wednesday’s episode of Play Like a Jet Live! Myself and Luke Grant went through a seven round mock draft simulation where we acted as Joe Douglas and the rest of the front office, whoever you want to place as GM in this scenario is up to you. Below are the picks and our thought process throughout the simulation. Enjoy this last 2021 New York Jets mock draft!

Not going to sugarcoat it, if Zach Wilson is not the pick here at two, it may be the biggest shock of the last few drafts. It has seemed like it was etched in stone for months that it cannot be anyone else but the BYU quarterback. Saleh and Douglas get their guy.

Luke and I each have two main targets here at 23, Alijah Vera-Tucker and Teven Jenkins. Both remained on the board, somehow. With that being the case it came done to best player available, which was the former Trojan in both cases, making this a relatively easy selection. We give our young quarterback a potentially very sturdy left side of the offensive line for the foreseeable future. Unfortunately we may not see this possibility tonight unless we get a Tunsil type video drop at some point throughout the day.

For most of this pick we were acknowledging two players in particular, Kadarius Toney and Jalean Phillips. Both fit needs, both fit value, both fit our systems. It was tough but the decision moved to Asante Samuel Jr. The fiesty cornerback of former NFL great Asante Samuel also fits the descriptions above and fills arguably the largest need on the team. With Asante having the ability to play well in both man and zone, regardless of whether he’s lined up inside and out, does not rule out Steven Nelson or Richard Sherman as potential signings post-draft. He plays with an alpha mentality which is always a plus at this position.

This one was pretty straightforward after making the trade down. Moving back ten spots from 66 to get another fourth round pick comes in clutch. Grabbing Carter here is a steal and we know it is someone they have an interest in. He’s a one cut type back who fits this scheme and provides some ability as a third down back as well, which should be his floor. Carter has been compared to former New York Giants running back Ahmad Bradshaw and if he can bring anything like that to this offense, it makes Wilson’s life much easier.

Round 3, Pick 90 (via Minnesota Vikings)

There was one other player we wanted to consider at 76. Then this guy was then there at 86, however we got a trade offer we couldn’t refuse from Minnesota to move down four spots while also moving up 29 spots from 154 to 125. This worked out flawlessly as we get the man with the name that matches the team, Kendrick Green. The versatile lineman can play center or guard in this system. They could ask him to play right away or when Lewis, Van Roten and McGovern are likely officially gone after the 2022 season. As you can see, after taking our third offensive player since Wilson, building the offense is an absolute must in the eyes of myself and Luke.

At some point wide receiver had to be addressed. There was some talk about going Quincy Roche here but with some other names available at defensive end, that was put to the side. We decided to focus on the receiver position and narrowed it down to a couple names, our new friend Anthony Schwartz and Jaelon Darden. We decided to go with the speedster out of Auburn, as it just made too much sense. The offense is in desperate need for that ability, particularly out of the slot. Not to mention the team met with Schwartz multiple times, there’s a level of interest between the two, especially as he said on our show that the offense fits him perfectly and leaving us with, “hopefully I can be a Jet.”

With Quincy Roche no longer available, someone kind of took over on this one… as the board was falling I had asked Luke about Divine Diablo right away. He is a linebacker/safety hybrid who would likely play linebacker in this defense. If you remember, the Jets were interested in signing Keanu Neal to fill this exact spot but he decided to go to Dallas. So that spot remains open and Diablo can step right in. The linebacker group looks set for 2021 but not so much afterwards as Mosley, Davis and Cashman could all realistically be off the team after the season. Diablo is an interesting player who’s a proverbial chess piece, and if you could not tell versatility is a massive part of what we have been looking for nearly every pick.

Defensive end is a position that could be looked at, we wanted to as Cam Sample and Shaka Toney were the two main guys we spoke about. However, seeing big Trey Sermon still on the board was fascinating. Sure, we had already selected Michael Carter but as Luke alluded to on the stream, this could be a thunder and lightning type deal. You would like to think one of these guys pan out and if both do, that’s a position that won’t need to be touched for a while. The running back room is scarce of talent so adding two names like this could be huge for the offense that plans to run pretty heavily.

So the ends mentioned above were still here so it was a matter of what style we wanted. Leaving this one up to Luke, we walk away with the flashier type in Shaka Toney. He fits the wide nine system very well with great speed and bend off the edge, even has an occasional spin in his game. The team needs to take swings at the defensive end position and even with the many, many names on the line, it should not stop them from acquiring a potential pass rush specialist at this level.

We wanted to go with upside at this point in the draft. Josh Imatorbhebhe was mentioned, as he fits that description to a t. However, the cornerback depth is still void of talent. Knowing this is Luke’s guy I gave him the keys to the car here and he drove away with it. Gowan can come in as another piece on the outside and if he shows ball skills in the league as well as he did at UCF, he should see the field pretty early on considering what they currently have.

With the last pick in the draft it came down to kicker and full back. No, not huge “upside” picks but two spots that could make a world of difference for the team. Mason ended up as the pick because 1. We know there is interest from the sheets side and 2. If this is anything like the Shanahan offense coming to New York, this will be very much needed as he can be our “Juice”.