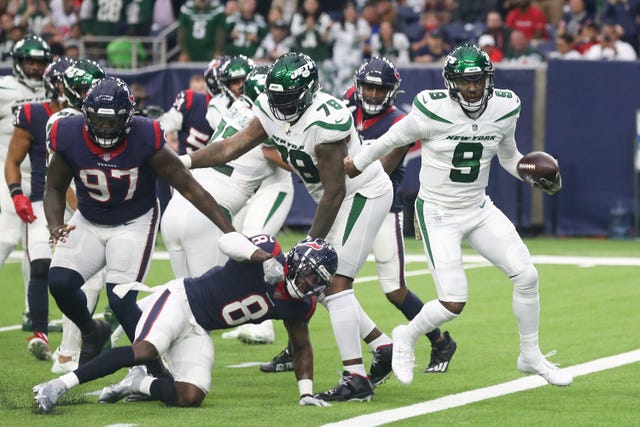 Finally a Jets win. After a three game losing streak with embarrassing losses, giving up an incredible amount of points and losing to a division opponent in the dolphins they get one in the win column.
It wasn’t pretty with Zach Wilson struggling from the same things he had struggled with before his injury; easy short throws, bad decision making , most notably with that shovel pass on that third and seventeen play where he inexplicably tried a shovel pass to Johnson the running back who wasn’t looking and going for huge plays instead of taking what the defense gave him.

Zach Wilson seem to be way to hyped up in the beginning of games letting his excitement get the batter of him floating balls over his his receivers in the flats. Mike Lefleur settled his QB down with the run game attacking the Houston defense on the edges with pitch plays, jet sweeps and wide zone play calls.
The defense stepped up their play, covering for their teams offensive struggles. Initially letting the Texans drive all the way down the field before John Franklin-Myers makes an incredible play on an attempted screen, batting the ball up, intercepting it and returning it from the Jets 23 all the way to the Texans 37. This was just an exceptional first half by JFM recording 2 sacks and an interception.
The defensive line which had been struggling of late got some pressure when needed, Quinnen Williams doing what he does bast as a disruptor and Bryce Hall after initially struggling; giving up a long Touchdown to Brandon Cooks settling things down with big plays when it was most needed, giving Zach Wilson opportunities to make a few good throws when needed.

Ultimately, there’s a lot to work on with this team. But also a-lot to work with, this coaching staff needs to get Wilson calm, prepared and settled at the start of every game. His slow starts are hurting this team and the Jets offense won’t be able to grow steadily like they need to if he can’t find a way to calm down in the first half of every start.