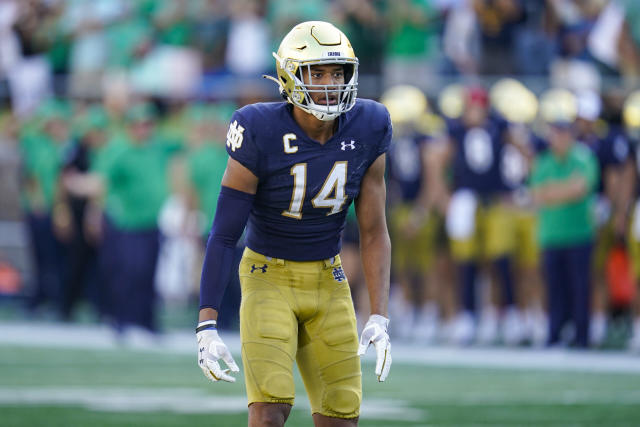 Notre Dame safety Kyle Hamilton is a player who is so good that watching him will make your jaw drop. He is a tall safety, there are currently in the NFL very few big safeties and even fewer that play like Mr Hamilton does.

His click and close is super human and derived from a high football IQ, pair that with elite physical traits and long limbs and you have an absolutely perfect fit for Robert Saleh’s cover three scheme. Scheme aside he can play multiple roles at an elite level elevating your defensive back end to higher levels of performance. The Jets currently have no one of his caliber and would benefit tremendously with a player of his talents.

Most Jets fans argue that he is either a luxury or that positional value dictates that he shouldn’t be a priority. My argument is that players with Kyle Hamilton’s abilities can’t be quantified as just a safety. In todays NFL there needs to be players on the back end of your defense that muddy the waters for Quarterbacks, forcing them to hold the ball for a split second longer. Making sure ultimately that his alignment is never what its gonna be post snap is reliant on scheme, but that also brings out the creativity of you defensive coaches.

Matching the ever creative landscape of NFL offensive football is tough. When the rules tip the scales their way players like Kyle Hamilton are force multipliers, bridging the chasm between offense and defensive football where your team can stand a chance on the field in every play. This Weekend saw some of the best football I’ve ever seen played in the divisional round of the playoffs and the conversation remained all about offense. Football is the ultimate team sport it’s not all about one side. Watching Patrick Mahomes and Josh Allen proved to me that players that change the game on defense are needed more than ever.