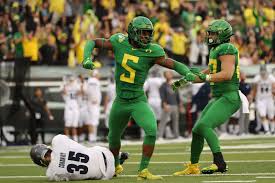 The 6’5” 258 pound edge defender prospect out of the university of Oregon looks the part of a elite edge defender. He has been recognized as such since before his days in college and while there he accumulated several awards depicting how great he is. Theres a narrative surrounding this young man of late that only happens around draft time. The talk of his lazy, take plays off mentality has been blown out of proportion in my mind, he seems like a genuine young man who wants to be great.
The first thing that jumps at you when watching him is how explosive his first step is. That part of his game forces opponents on their heels quickly with little time to adjust. He is also a fluid athlete that can contort his body around tackles inside and out. Speed is not his only game, he can also convert that speed to power forcing an unwilling opponent into the backfield giving him a quick attempt at the QB. The most impressive part of his pass rush game is His counter game being able to have a plan B when rushing and I’ve seen him tie two moves together which is a high level form of pass rushing mostly used by the pros.

You certainly cant speak of an edge rusher without mentioning the ability to set the edge, he can do it and has done it and is getting better. There was a particular play on 4th and 1 against USC where he stood up the Tackle while keeping his eyes up to locate the ball carrier then used his quickness to swim pass the Offensive lineman to atop the run short, all done in one swoop. An ability to play the run in my opinion is a high level of wanting it more than everyone else and having the tools to get it. He has that want, that hunger you see in only a select few. All he needs is the environment to cultivate and multiply what he has naturally.