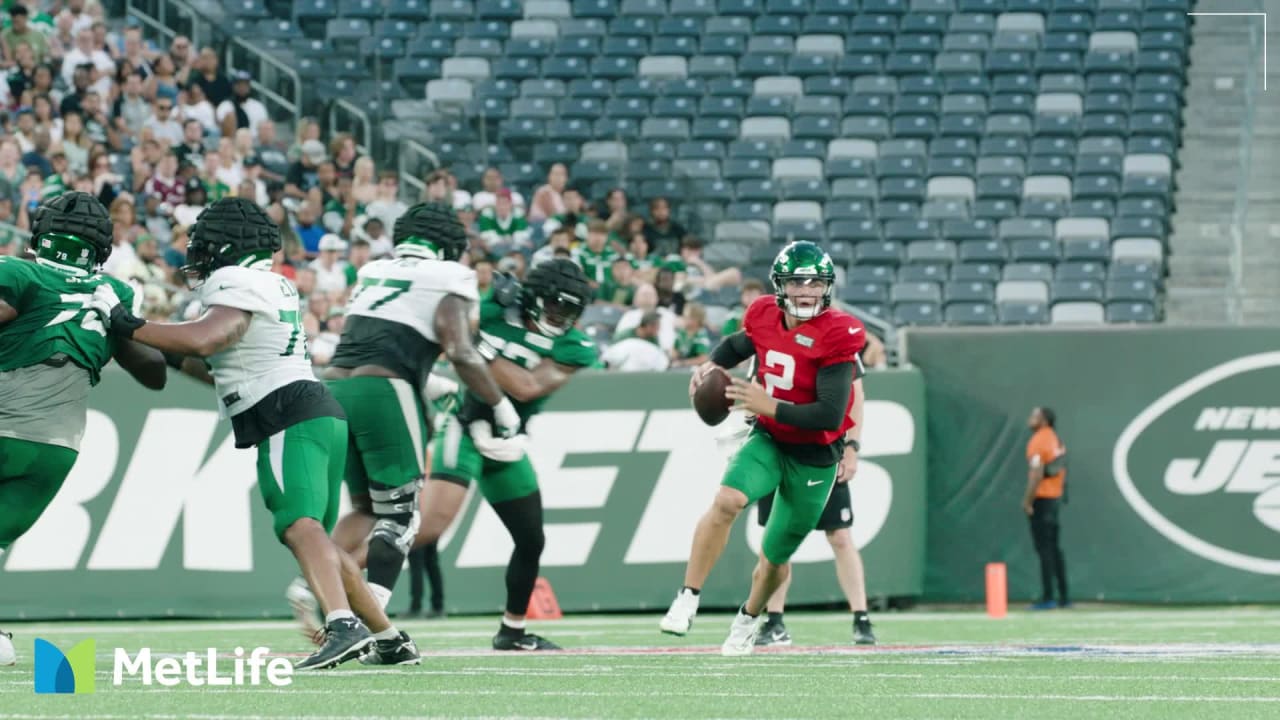 NFL training camp is all business and comprises of several moving parts joined together moving to towards one goal. The senior players come into camp with the full knowledge of how it all works but the rookies are completely new to the process. This assembly though forward focused needs to be well organized and every detail covered precisely. From the eating habits and workouts all curated to fit everyone precisely, coaches meticulously engineer every meeting to fit their overall plans for the team overall.

The New York Jets are no different, Robert Saleh has had a plan from the start, no doubt it’s all coming together rather nicely. Right at the start of camp the announcement of Mehki Becton coming off the physically unable to perform list was comforting given how much of an integral part of the plan he is. George Fant hasn’t been active but coaches are taking it slow with him and are positive he will be good to go soon. Zack Wilson has looked a bit more steady and decisive now entering a second year in this offense, given the upgrade in talent around him any rise in his game will work wonders for this team. Denzel Mims has been flashing but hasn’t had to many opportunities with the ones, he reiterated his goal is to be a starter but will do whatever the teams asks of him. Rookies Garrett Wilson and Amard Gardner have been as advertised making big-time plays in multiple practices as for “Sauce” you can see why he was a high first round pick, he is just way to athletic and fleet of foot to be 6” plus. Bryce Huff is the forgotten man on the Defensive line has been reminding every one of his presence daily. Carl Lawson has started where he left off before his injury last year, absolutely unstoppable at times reminding his fellow teammates and coaches how much they missed his presence least year during the season.
Elijah Moore seems to be a star in the making. He is very consistent. What he does is flashy yes but you can’t call it a.flash if it happens daily that’s pure light. The addition of CJ Uzamah and Tyler Conklin has improved the tight end room and you see it in how Zach is getting comfortable quickly in including them in the housing game. Breece Hall’s down hill running style is electric and pared with Michael Carter’s relentless style that one two punch can be unstoppable.
Ultimately watching the green and white scrimmage, there are still wrinkles on defense that needs to be ironed out, in particular, the run defense is still an issue and on a few plays the quick penetration by the defensive line exposed the bad positioning of the linebackers and safeties like we saw numerous times last year. Coach Robert Saleh addressed this by acknowledging that their aggressive play upfront does come at a cost but should be answered by proper positioning at the second and third levels of the defense. Let’s hope these guys get on one page quickly because the Jets schedule just happen to have a generous helping of great running teams right at the start. Looking closely the talent is there and the team looks quicker and more talented but they have a long way to go. Let’s hope for no injuries and more growth going forward.